Established in 1872, Harper’s Chapel is in Happy Valley, near Patterson, North Carolina. The name comes from a former congressman who donated the land for the church and cemetery.

In the rural northwest corner of North Carolina, near Todd, is St. Matthew’s Chapel.  Its history started when a pastor and some others located to this area to avoid a malaria outbreak and they established a local church in the mid-19th century.  The exact age of the bulding here isn’t clear, but it’s believed to be over a century old.   A preservation effort over the last few years has resulted in repairs and new paint and the church is available now for community events.

Built in 1902, Worth’s Chapel is primarily a Gothic style church with some Romanesque influences and includes arched windows and a tall corner tower with four turrets (photo below).  It’s thought the church was established in 1852 when the original chapel was located across the road from the newer building.   A few wealthy businessmen started the church as a community, non-denominational group.  The community largely was erased after a major flood in 1940 and only a handful of the village’s old buildings remain, including this church.   It’s now known as Creston United Methodist Church and is listed on the National Register of Historic Places.

Elk Park is a small town (population <500) in Avery County, North Carolina.  I saw this church when driving through and took a couple of photos.  The church is currently not having services due to the pandemic and I haven’t found anything on its history either.

St. Paul’s Reformed Church was built in 1904 and is in Newton, North Carolina.  The Gothic Revival style includes a bell tower with an open belfry and a pyramidal roof.  German settlers to the area traveling from Pennsylvania brought the “Reformed” faith and started a congregation in the late 1700s which would evolve into St. Paul’s.  The church is maintained but no longer in use as the congregation built a new brick building across the street in 1975 due to a growing membership.  The older building is included on the National Register of Historic Places. 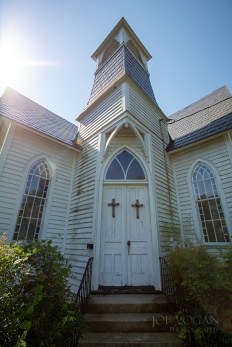 Just at the start of the High Road to Taos  (driving from Albuquerque) is El Sagrado Carazon, a New Mexico Catholic church founded as a mission in the early 17th-century.  The church was initially destroyed during a revolt in 1680 but has been rebuilt (and destroyed) multiple times.  It was destroyed by fire in the early 1900s, but was rebuilt in 1910 and then once more in 1947 in an adobe style with twin buttresses. 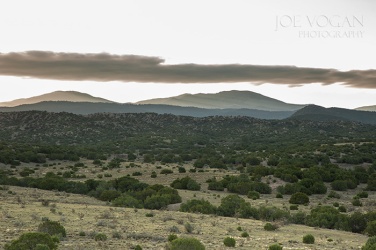 Mission San Xavier del Bac is a National Historic Landmark located a few miles south of Tucson, Arizona.  Although the mission was founded in 1692, the original church was destroyed by Apache Indians in about 1770.  The one above, completed in 1797, is considered one of the best examples of Spanish Colonial architecture in the U.S.  I visited early one morning and was adopted by  a pair of local dogs as I walked up to the top of Grotto Hill which overlooks the church and the O’odham Nation Indian Reservation.  Because of its long history, it’s been through both stages of neglect and restoration.  Much of the restoration work was performed in the late 20th century after it was included on the National Register of Historic Places.   The building is low-fire clay brick, stone and lime mortar.  The interior is intricate, with fine wood work and baroque decorations throughout the chapel and altar areas.  A few photos from the visit are below along with a pair from 1870 found in the Library of Congress collection. 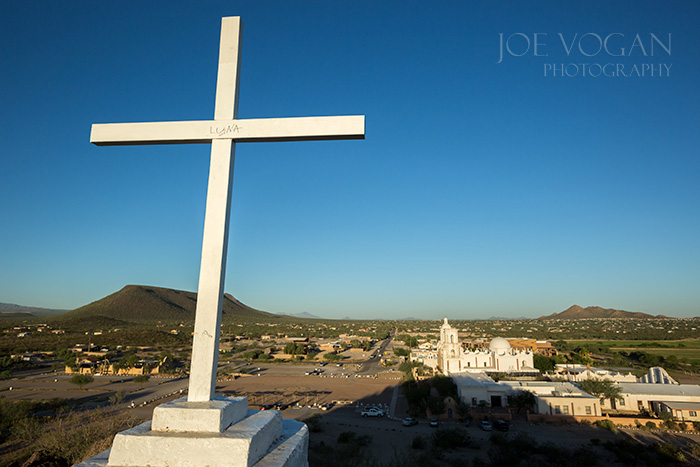 Chinle, Arizona is a small  town in Navajo Nation not far from Canyon de Chelly and includes Our Lady of Fatima Catholic Church.  Franciscan priests established the first church here in 1905.  I don’t think this church building above is very old, but from reading online it has a tabernacle modeled after a Navajo summer home and features a six foot hole in the center of the interior floor to expose the sacred earth.

Fort Ogden, Florida is a small community in south-central Florida.  A historical marker had this to say about its early days-

“As white settlers moved into Florida, demands increased for the removal of the Seminole Indians to a western reservation. The Seminoles failed to cooperate, and in 1835 the conflict known as the Second Seminole Indian War began. By 1841, the Indians were still entrenched in central and south Florida. Campaign plans for that year aimed at clearing Indians from the area between the Withlacoochee River and the frontier and the attacking Indian bands in Big Cypress Swamp. To sustain the wide-ranging troops, detached camps were established at various points. Camp Ogden, named for Captain Edmund Ogden of the 8th US Infantry, seems to have been established in July 1841, as an advanced position for the Big Cypress campaign. In addition, 55 canoes were constructed for the next winter’s Everglades expedition. Before the Camp was abandoned in the fall, an influential Indian leader, Coacoochee, visited Camp Ogden. The community of Fort Ogden developed in this citrus and cattle region in the last part of the 19th century and took its name from the Second Seminole War camp.”

This Methodist Church pictured here sits across from a small pasture of cows.  I spotted it on my drive south during an Everglades trip, though I haven’t found more information on its history so far. 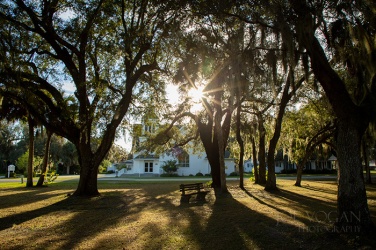 In downtown Pensacola, Florida there are several historic churches.  Pensacola was founded a few years before St. Augustine, but was destroyed by a hurricane soon after and it took nearly a century before it was reestablished.  St. Michael’s Catholic Church has a personal connection in that my parents were married there.  The Parish was established in 1781 but early records were lost due to the fires and hurricanes over the years.  The Gothic Revival style church was dedicated in 1886.  In 2011 it was elevated to Basilica status due to its historic significance.  A related St. Michael’s cemetery is nearby which dates back to 1781 where the Spaniards settling the area were buried.  It was the only cemetery in the city until 1876. 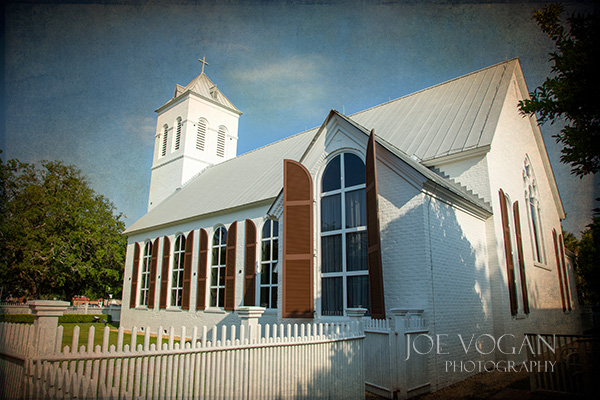 Pensacola’s Old Christ Church was built in 1832 and one of the oldest church buildings in Florida.  The Norman-Gothic building was occupied by federal troops during the Civil War and has been an Episcopal church, a library and a museum over the years.  It was renovated in 1999 and is listed on the National Register of Historic Places.

When the area where Old Christ Church deteriorated into a slum in the early 1900s, Christ Church moved to North Hill and built a new church (above).  It was completed in 1903 at a cost of $25,000.